Yes, really. In 2020, first somewhere… then another somewhere… and then another. Like it or not, full self-driving (FSD) cars are coming. If you’ve driven a Tesla on enhanced autopilot, it’s easy to imagine.

Once FSD is here, it doesn’t matter who’s inside: you in your own car or a paying rideshare customer in a ‘robotaxi.’

Maybe YOUR robotaxi because YOUR Tesla’s on the Tesla Network!

April 22, 2019 ∼ THE BIG PICTURE. Elon and his team laid out what is already reality at Tesla, explained how things work, and where things are going. Video below. 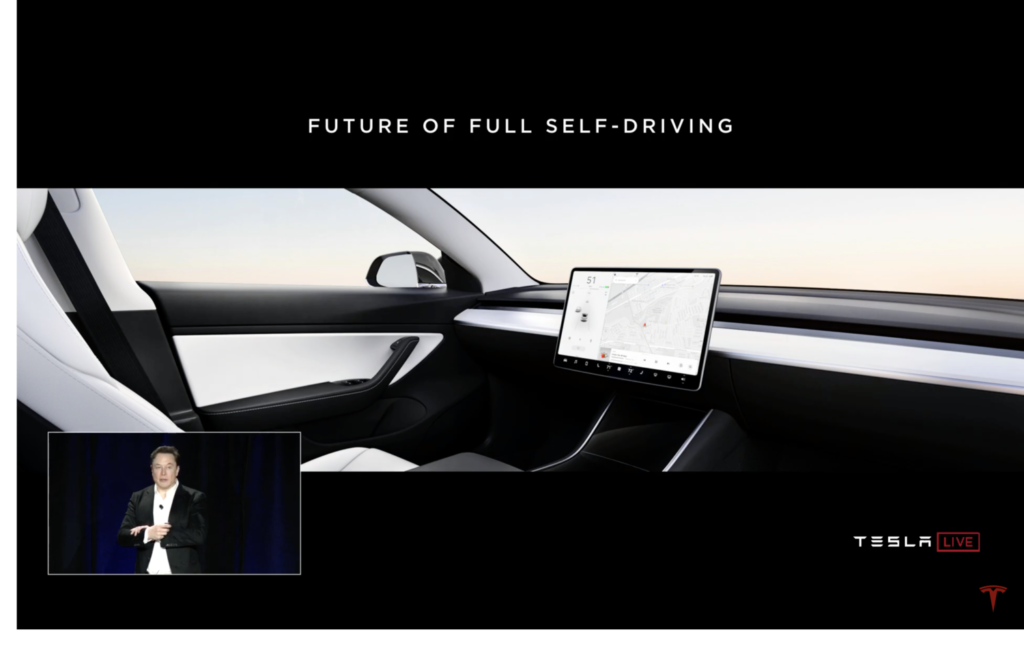 Yes. And robotaxis. FSD cars aren’t suddenly showing up out of nowhere. Elon had a conversation with Travis Kalanick, founder and then-CEO of Uber, back in 2015.

Travis said once Elon made them, he wanted to buy all of  them and replace his Uber drivers with an autonomous fleet. It’d be easier and more profitable to run.

Hmmm, Elon thought. Hmmm, YOU should be thinking!

Change Begins with an Idea

Most people don’t like change. A very few actively pursue it. But adversity and scarcity kick us all into action. In the end, we have to deal with it—it’s simply the way the world works. 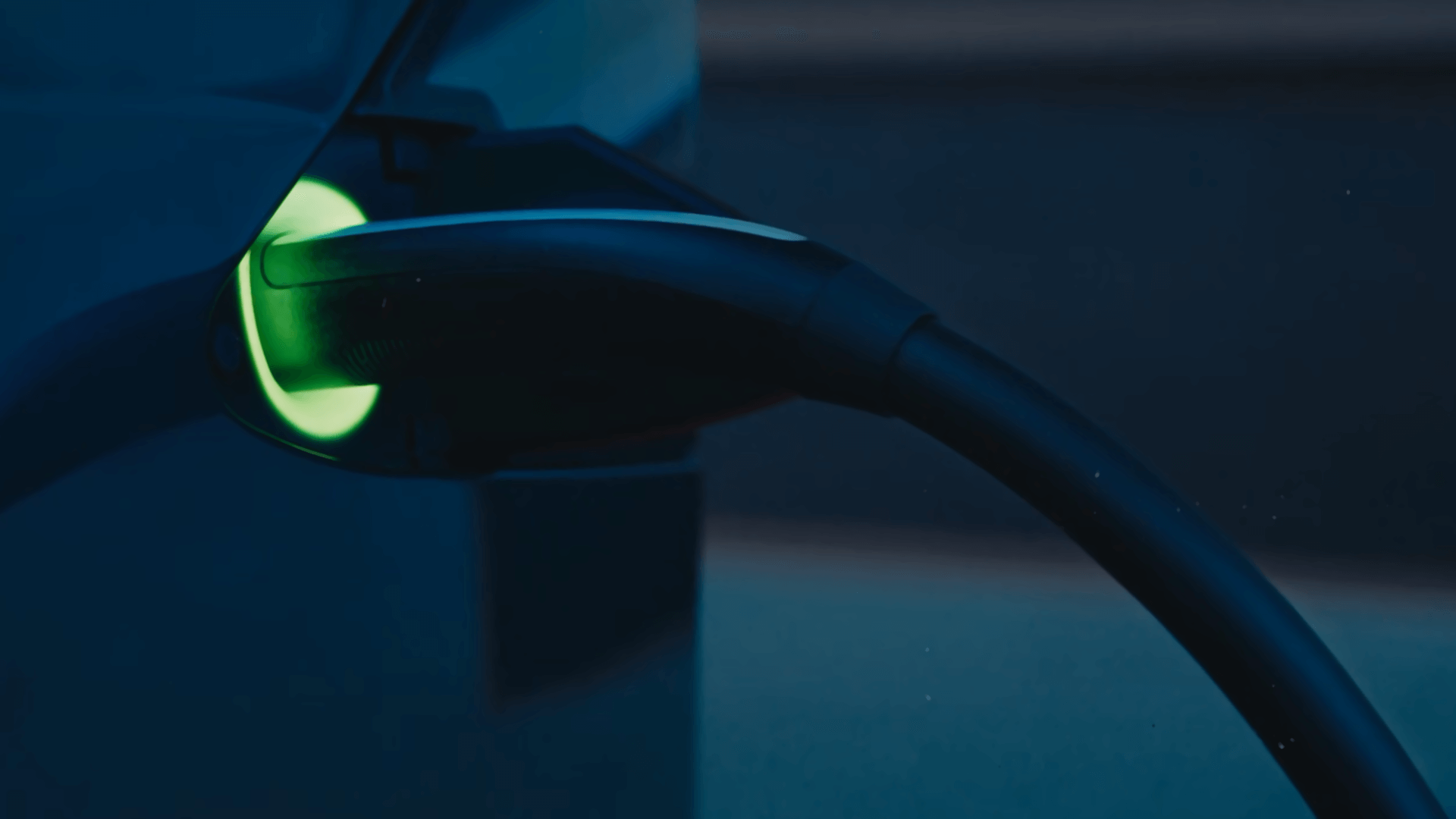 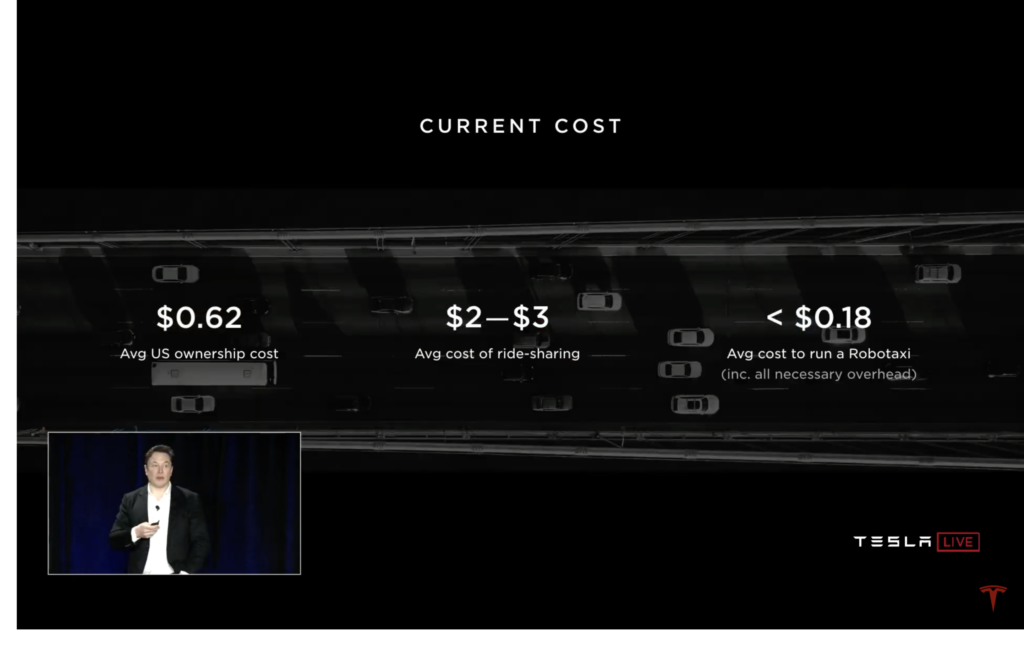 Teslas are designed to meet or beat every competitor at ‘mid-market and up’ and change the world. Once there’s enough of them, EVs will  reduce carbon emissions and actively address climate change.

But It’s Not Just about Economics

A Tesla is an amazing state-of-the-art robot today. Now there’s a new buying factor to consider. 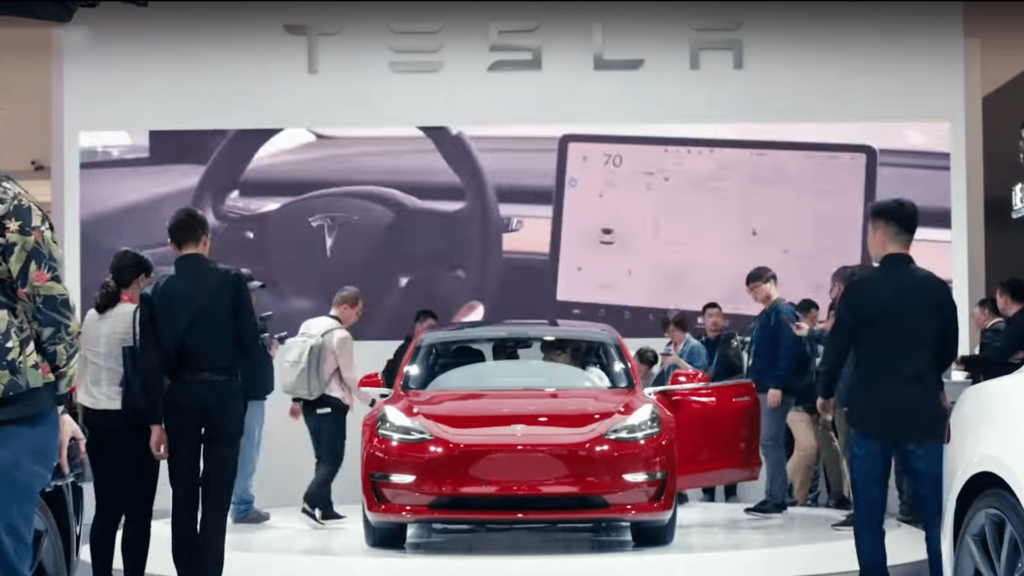 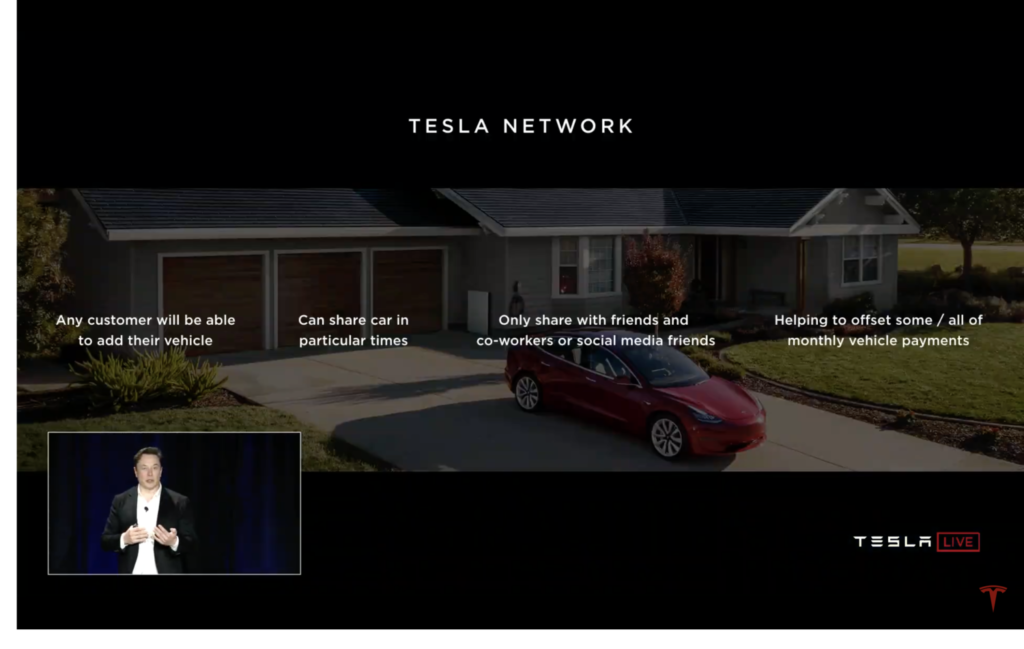 If YOU own a FSD Tesla when the Tesla Network (basically an Uber-like app) goes live, you can put your ‘robot’ to work.

You’ll have an ‘Ubermobile,’ an Airbnb-like unit that makes you money. A new gig you can run on the side.

Put your car to work on the Tesla Network when you’re not using it, or don’t. The choice is yours.

But suddenly, YOUR CAR can be an INVESTMENT ASSET.

Here’s the big picture—Past, Present, and Future. A recap plus what to expect from Elon and Tesla in coming months.

Actual timing is likely to change but the changes are coming. Follow JAA Blogs to stay on top of the story. 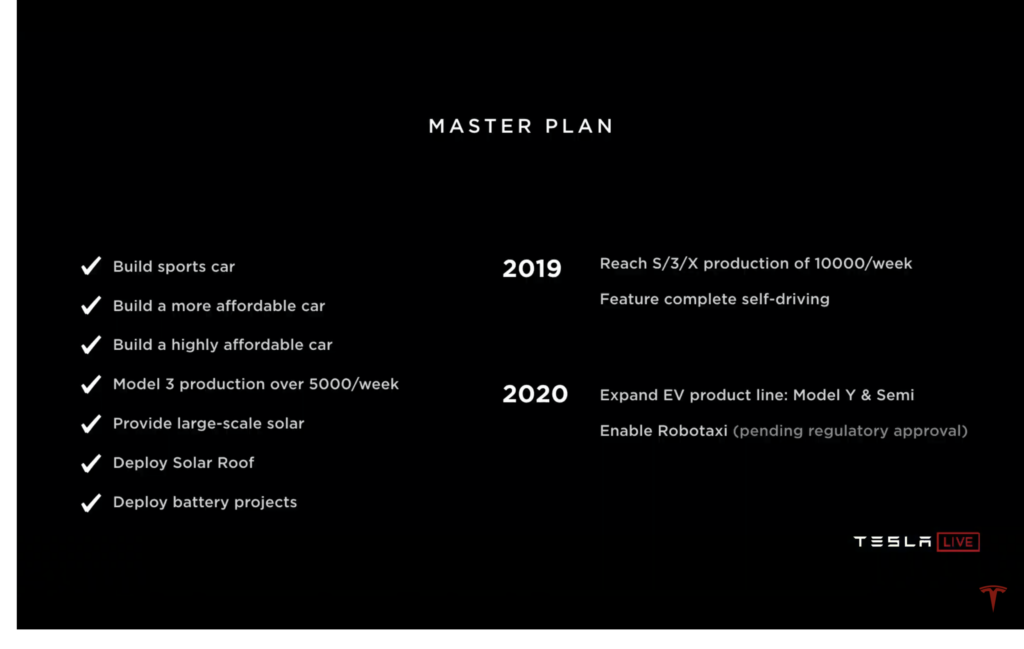 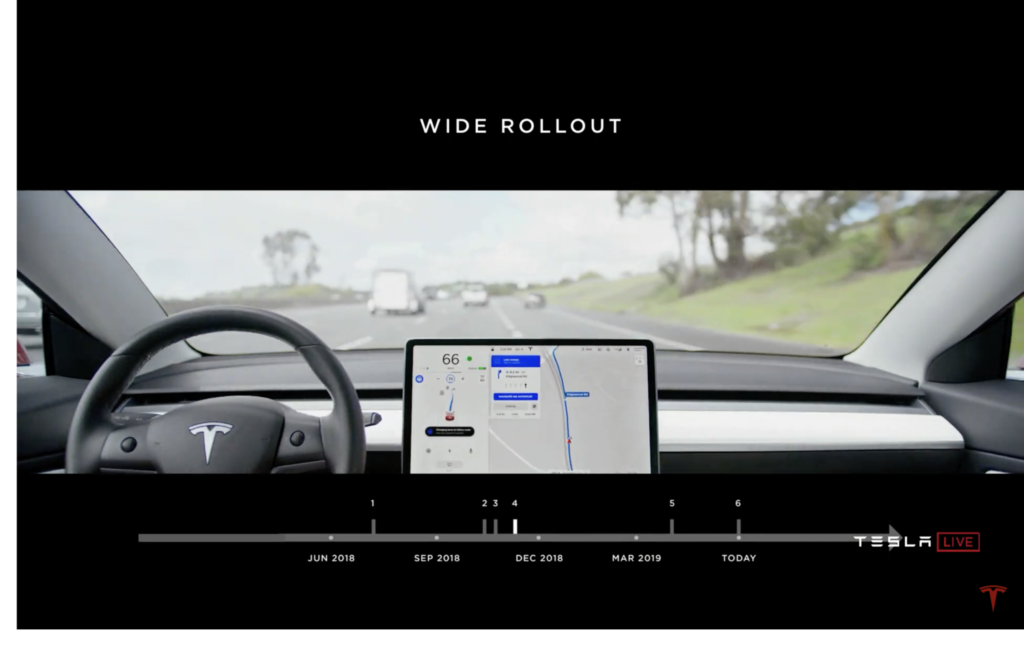 Build It and They Will Come

Tesla now delivers great cars around the world but to get a Tesla fleet operating at scale, Elon’s offering Tesla owners a piece of the earnings pie via the Tesla Network.

What Is the Tesla Network?

Basically, the Tesla Network is like Uber’s rider and driver apps, including the platform running in the background that makes it all happen.

Roll-out is in test. First, it will be used as a rideshare vehicle opportunity. Then with FSD, as a robotaxi.

Tesla owners will control who uses their car: maybe just friends and family, or maybe it’s available to the general public, for a few hours a day or full time. 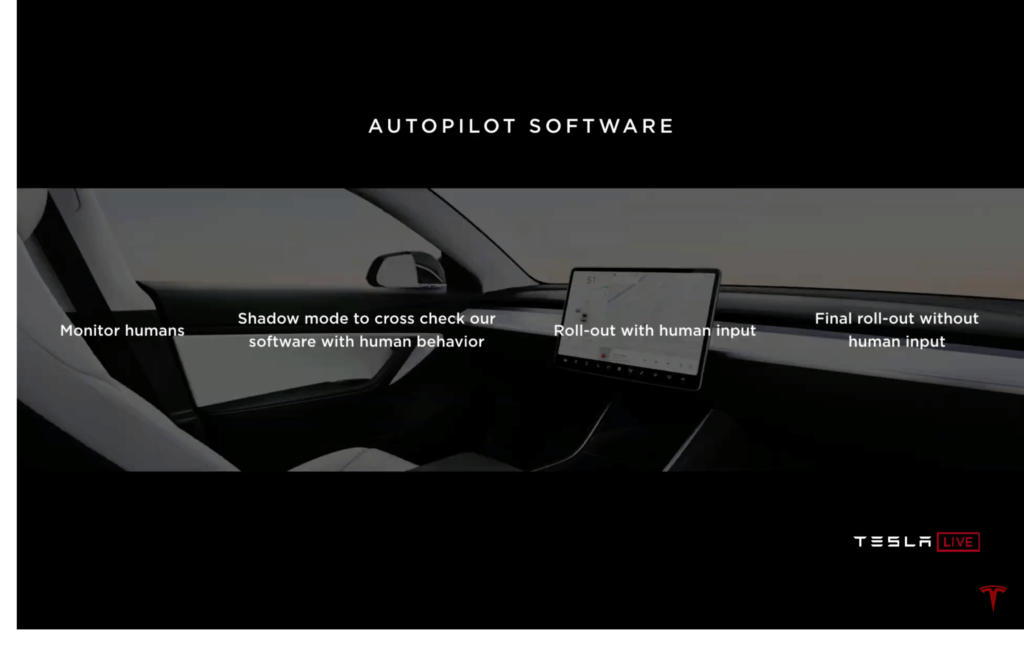 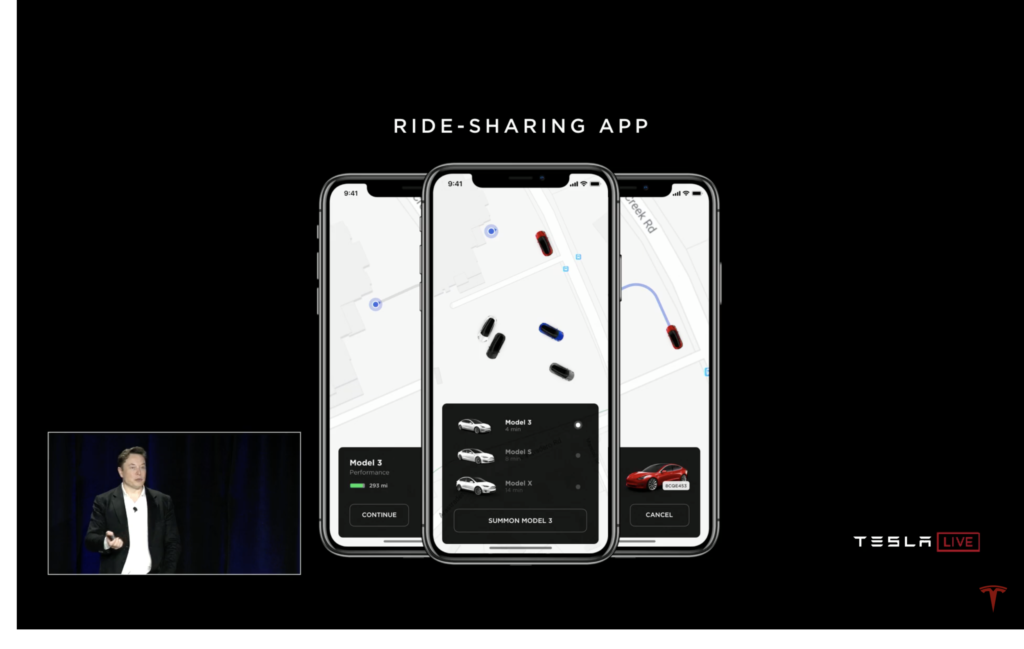 This is vertical integration we haven’t seen the likes of since Henry Ford. The Tesla Network is the next step.

The transportation paradigm—how we get around town—is shifting globally from owning and driving our own cars to using a car service: Transportation-as-a-Service (TaaS) or Mobility-as-a-Service (MaaS). The creation of rideshare platforms ignited the shift 10 years ago.

The Tesla Network turns every Tesla on the road into an income generating opportunity. 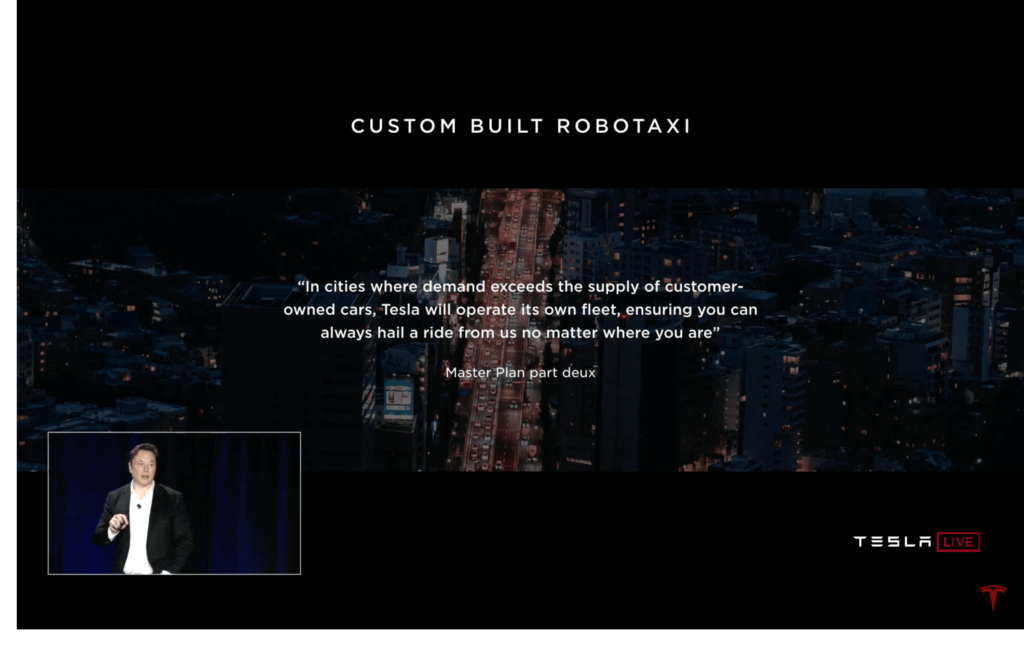 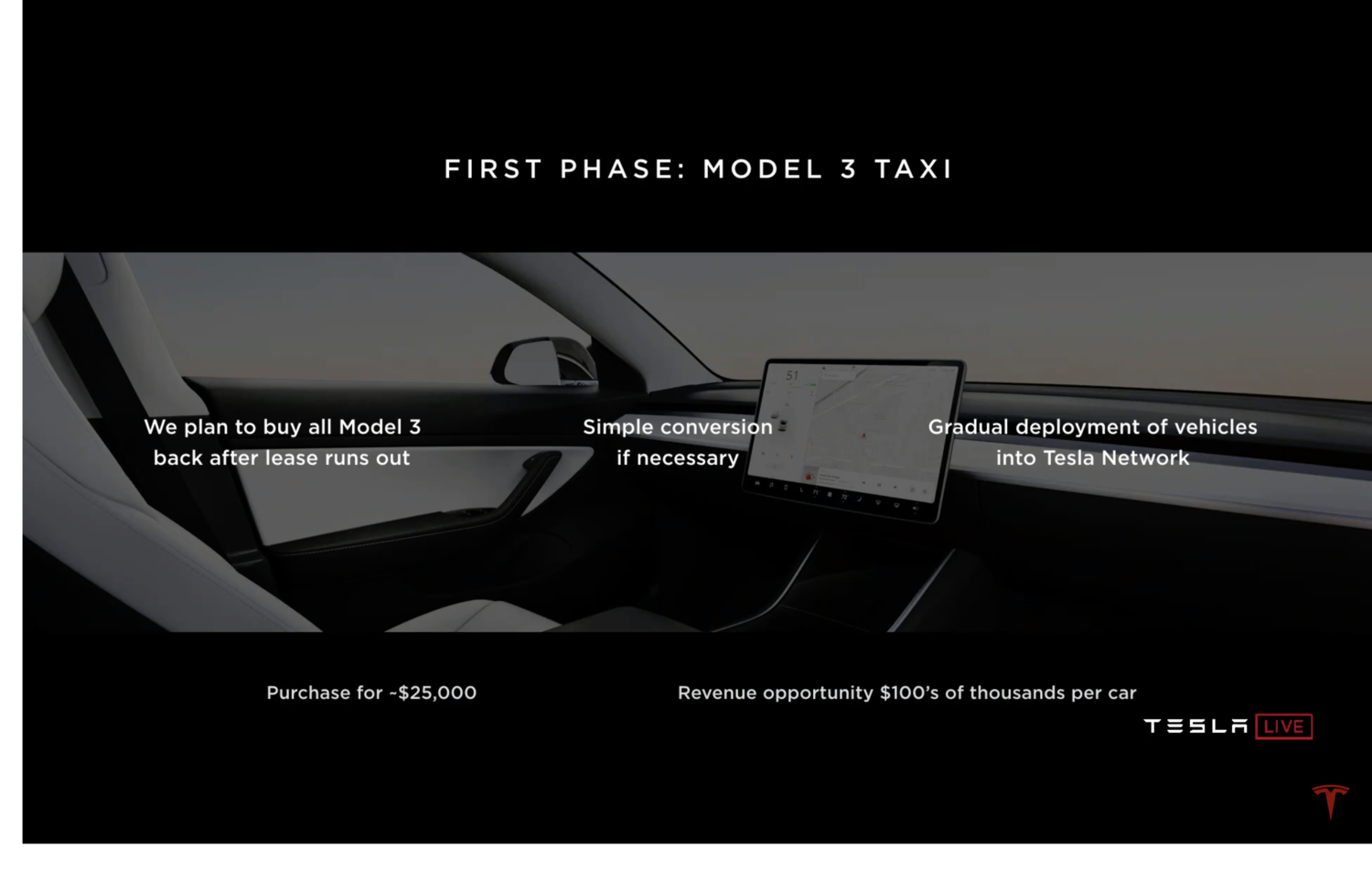 Although Tesla owners help create the initial Tesla robotaxi fleet in individual markets, Tesla also plans to scale it with cars they own and operate.

First Phase buys back all Model 3s currently leased as leases run out and autonomy’s arrived.

Let’s assume Elon executes his Master Plan. At some point, a Tesla’s revenue-generating value will be reflected in the purchase price for the car.

What will he charge for a car that can MAKE $30,000 a year? What’s that car’s re-sale value likely to be 5 years later, when it can still generate revenue?

At what point does Tesla stop selling cars and simply choose to run its own Tesla fleet? 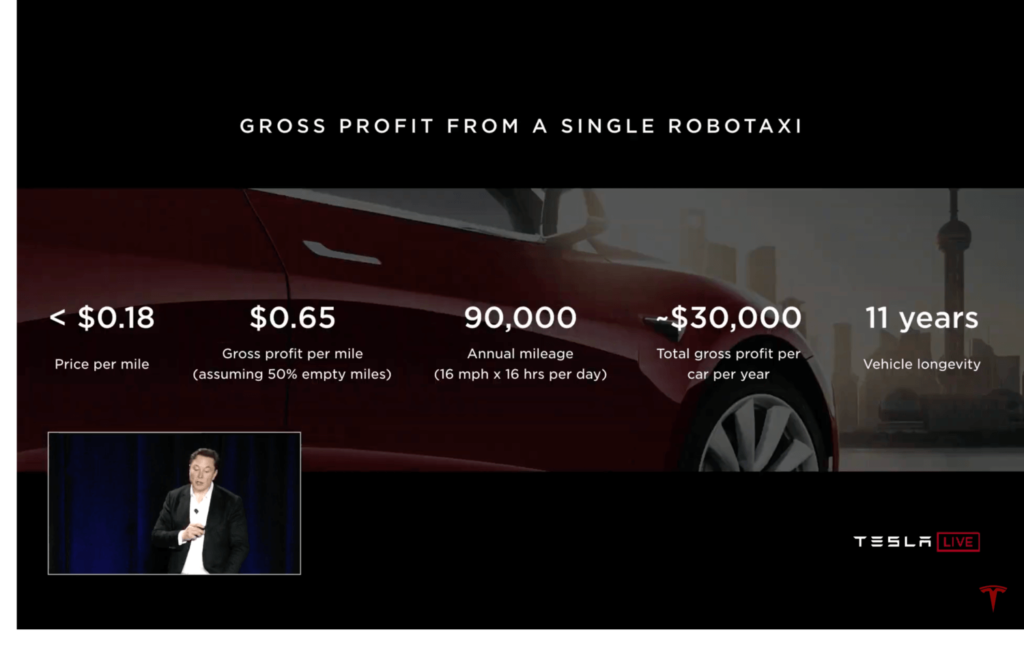 Popcorn ready? Keep watching and listening. If you want to see our thinking about how to capitalize on the changes coming, click JAA Tesla.